Many South Koreans consider a trip to the Dodko Islands a civic duty. 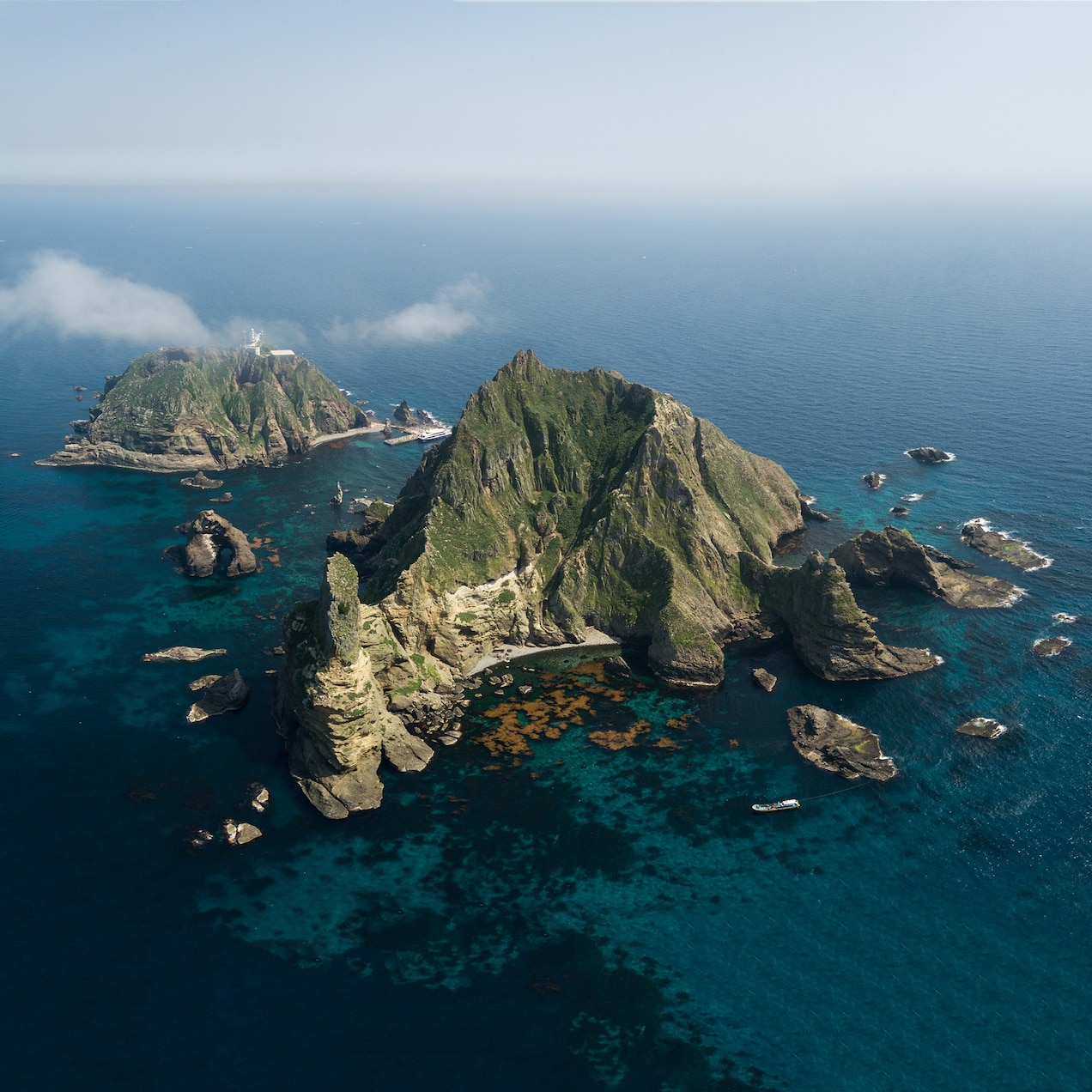 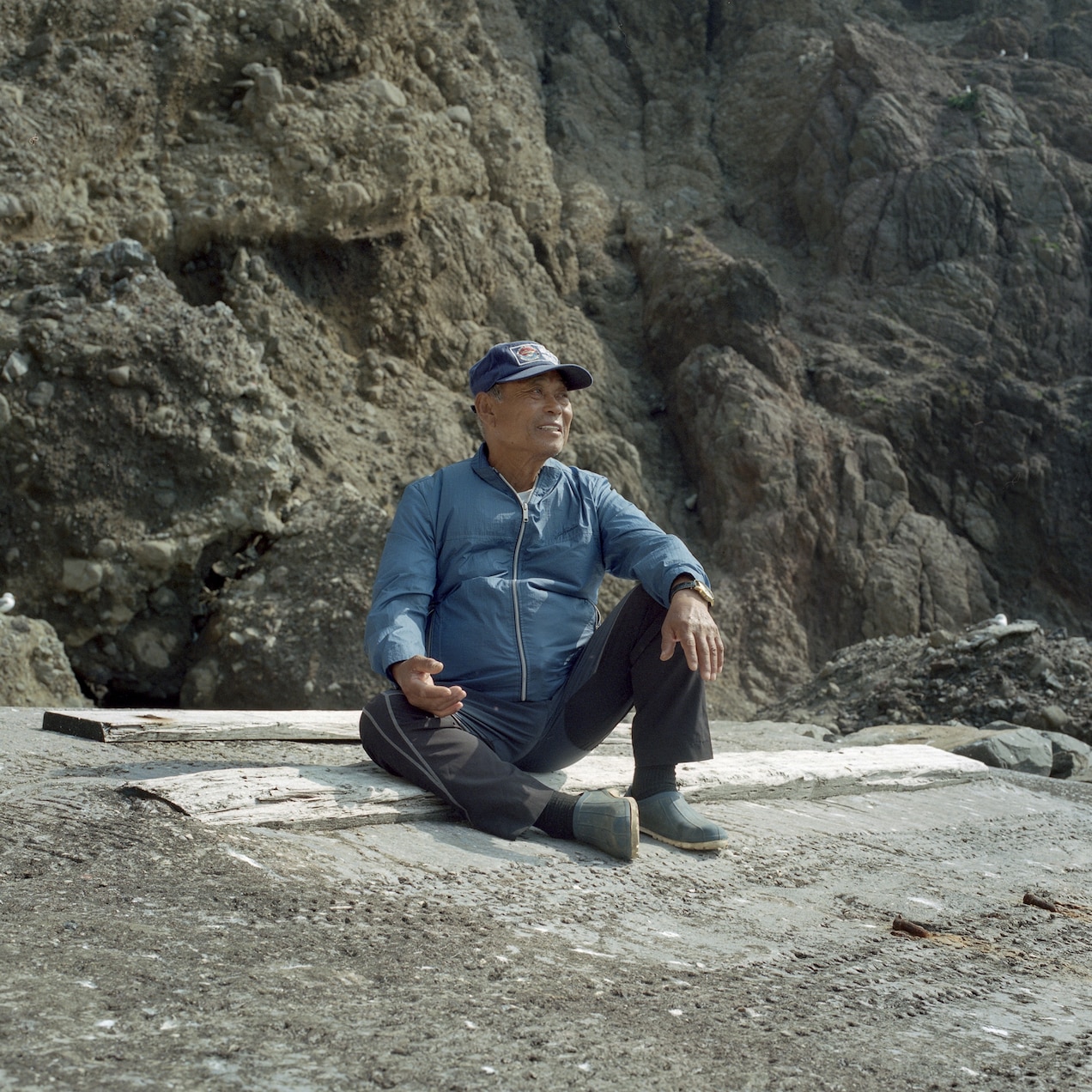 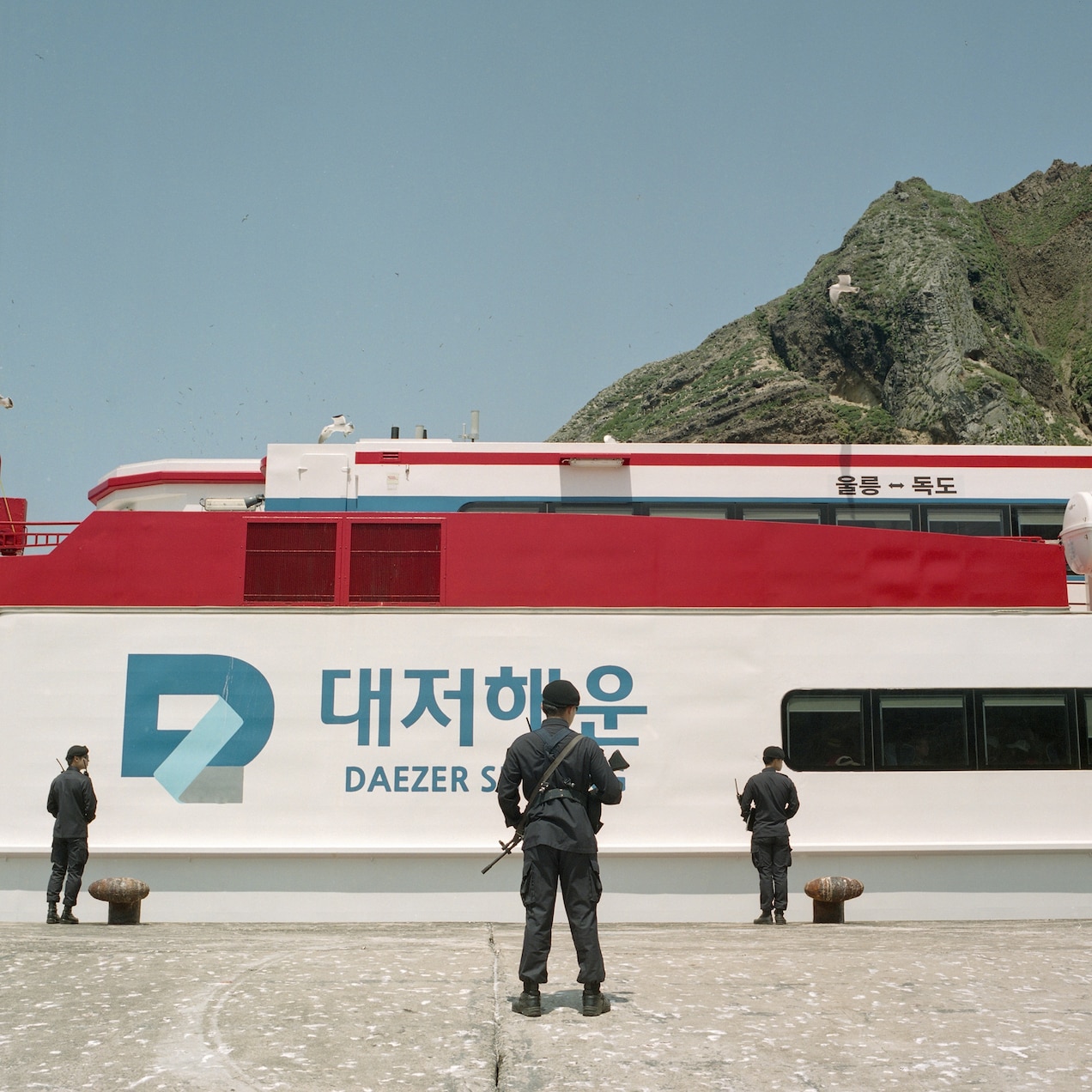 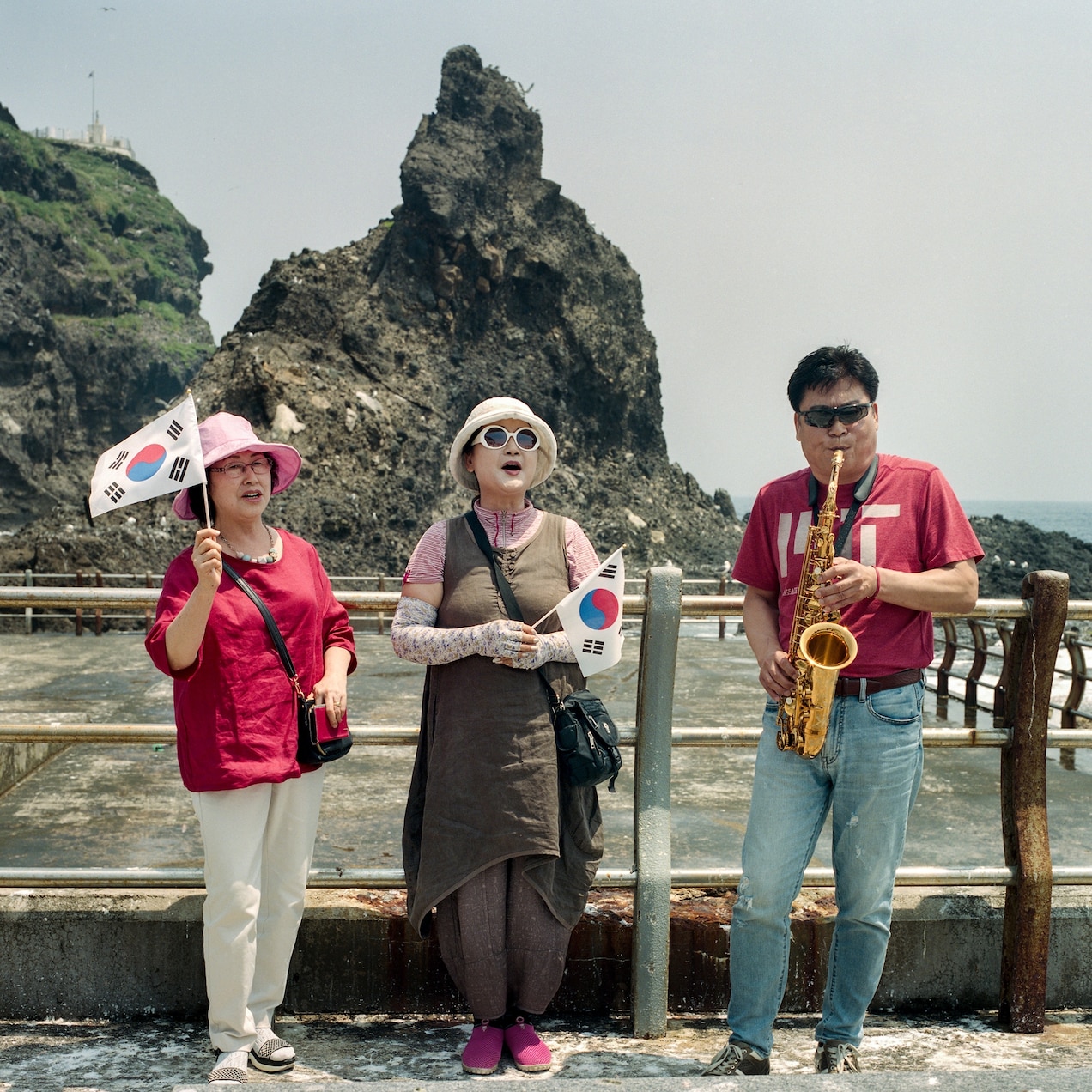 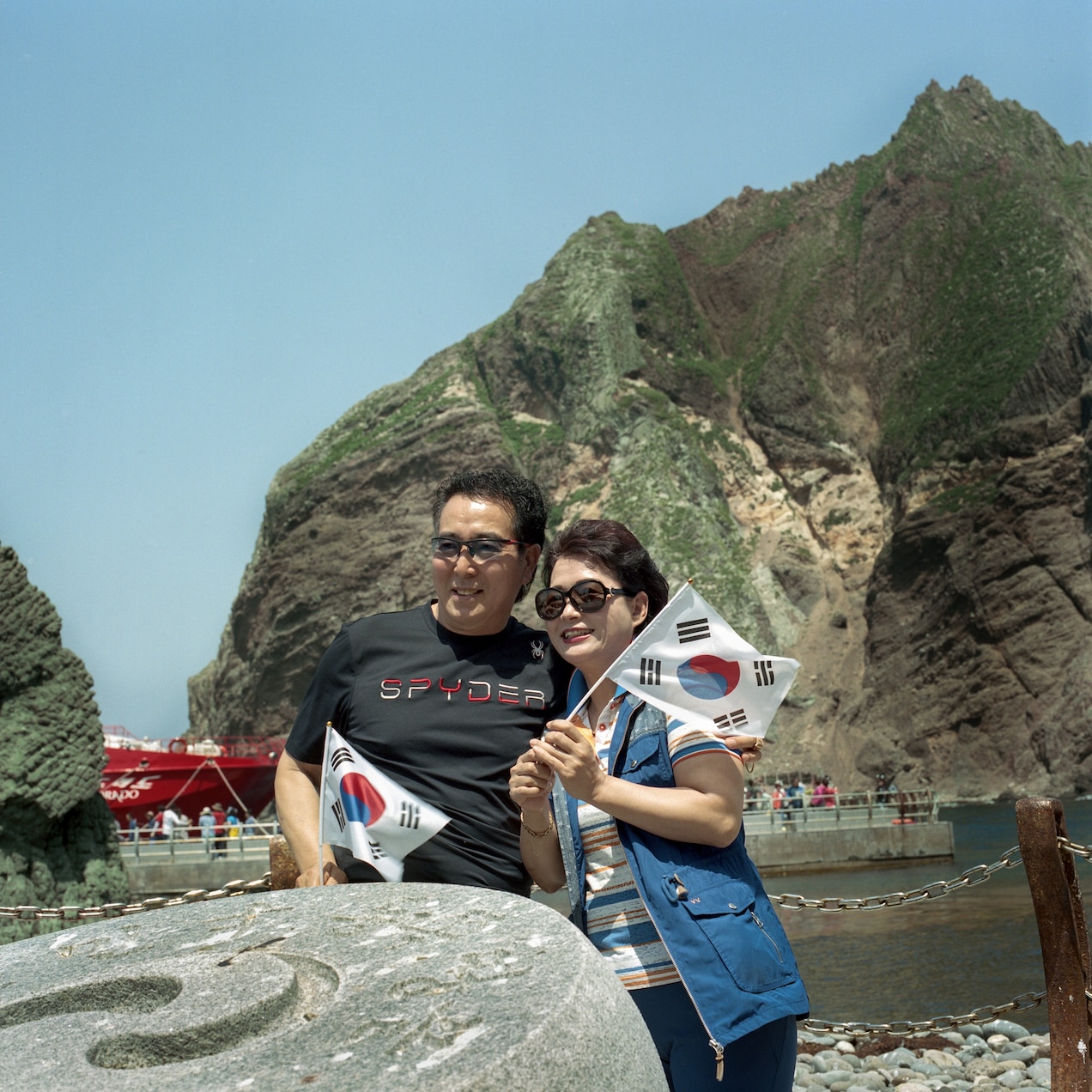 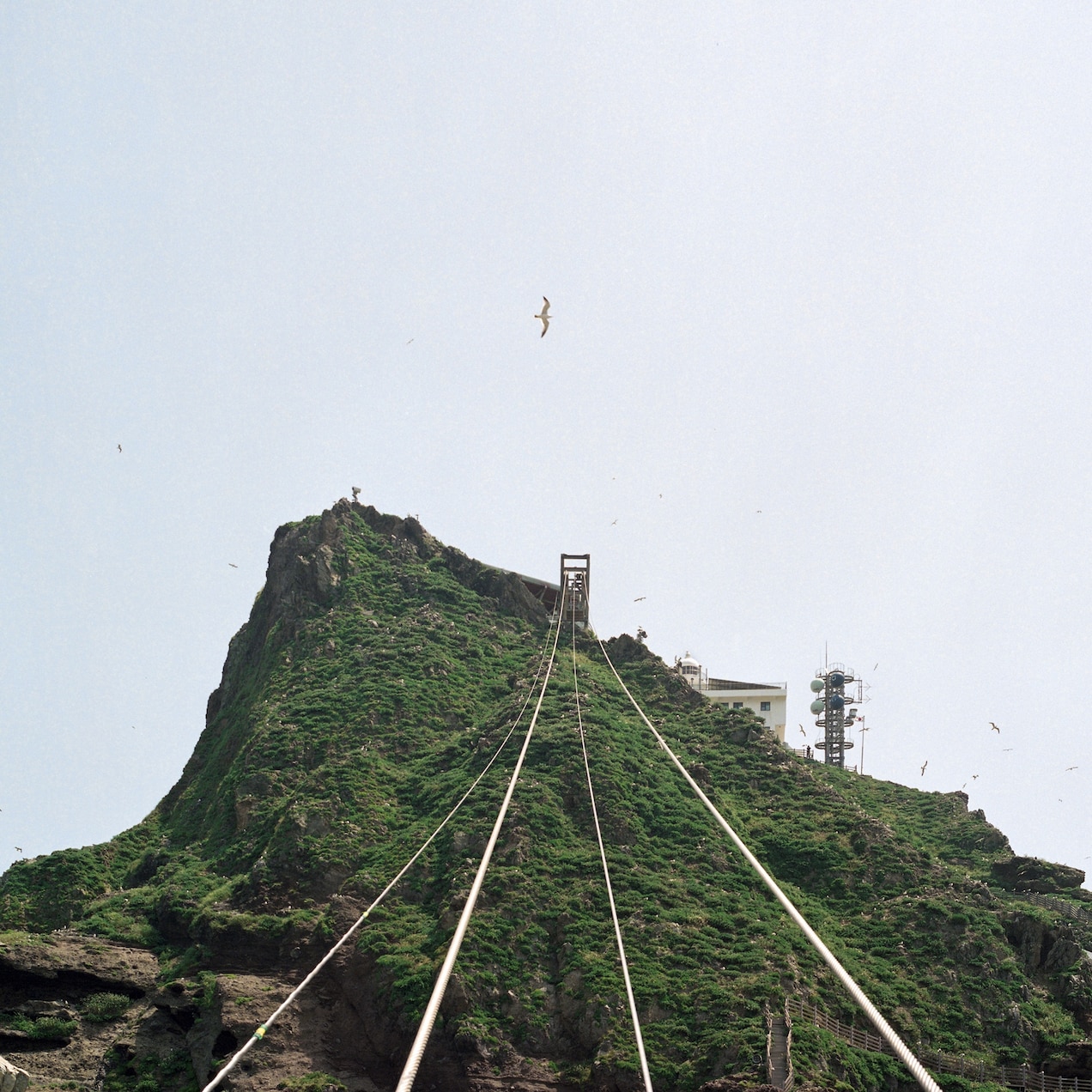 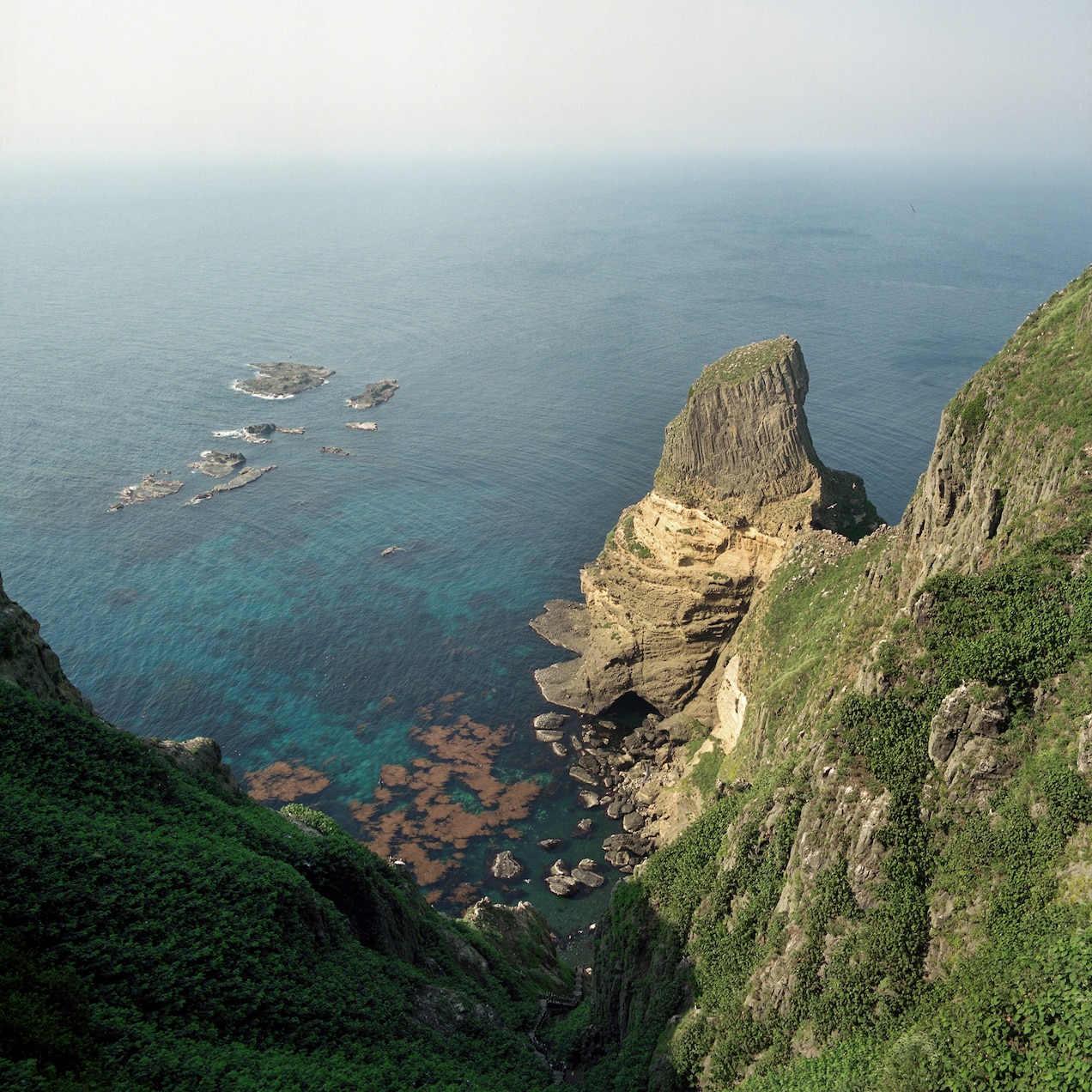 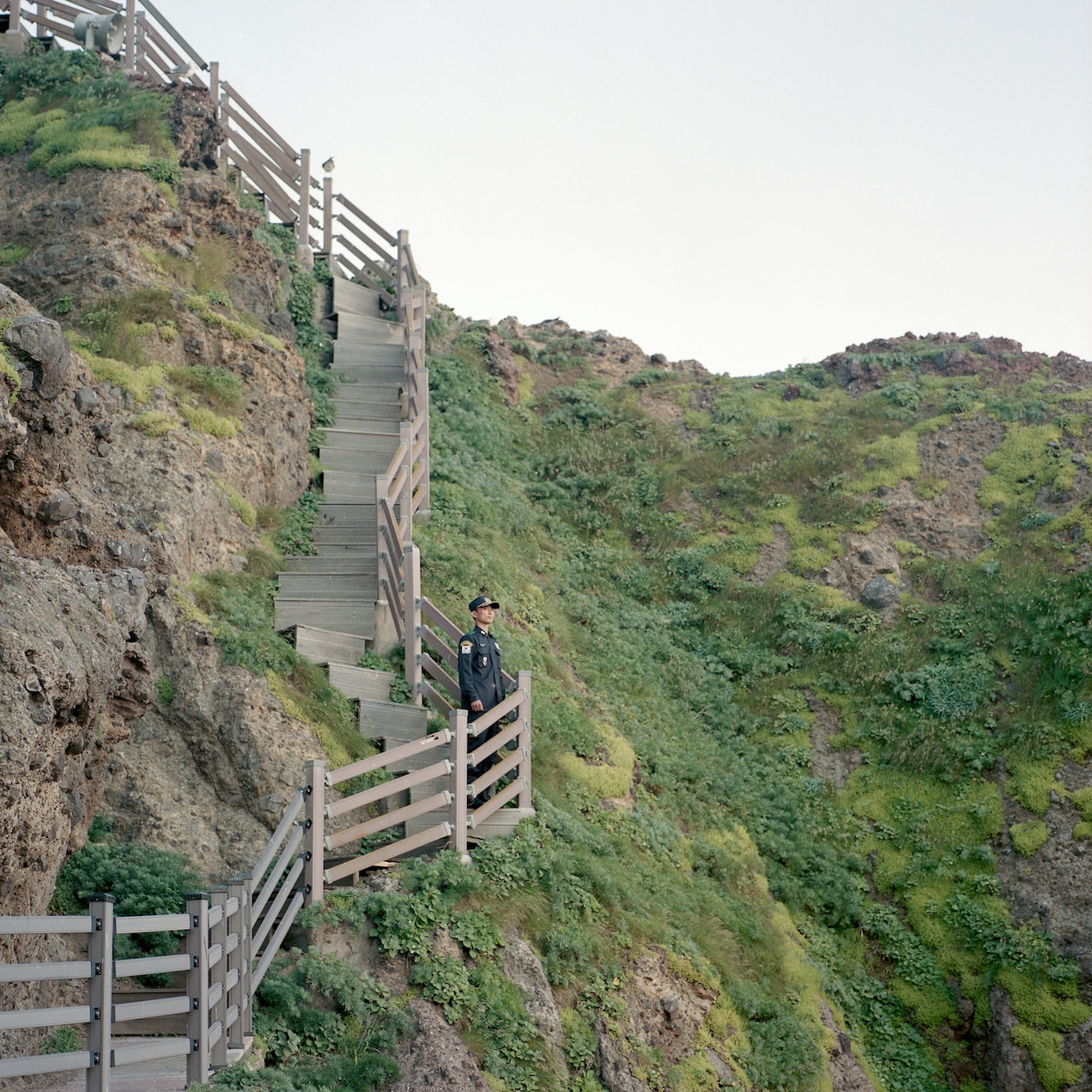 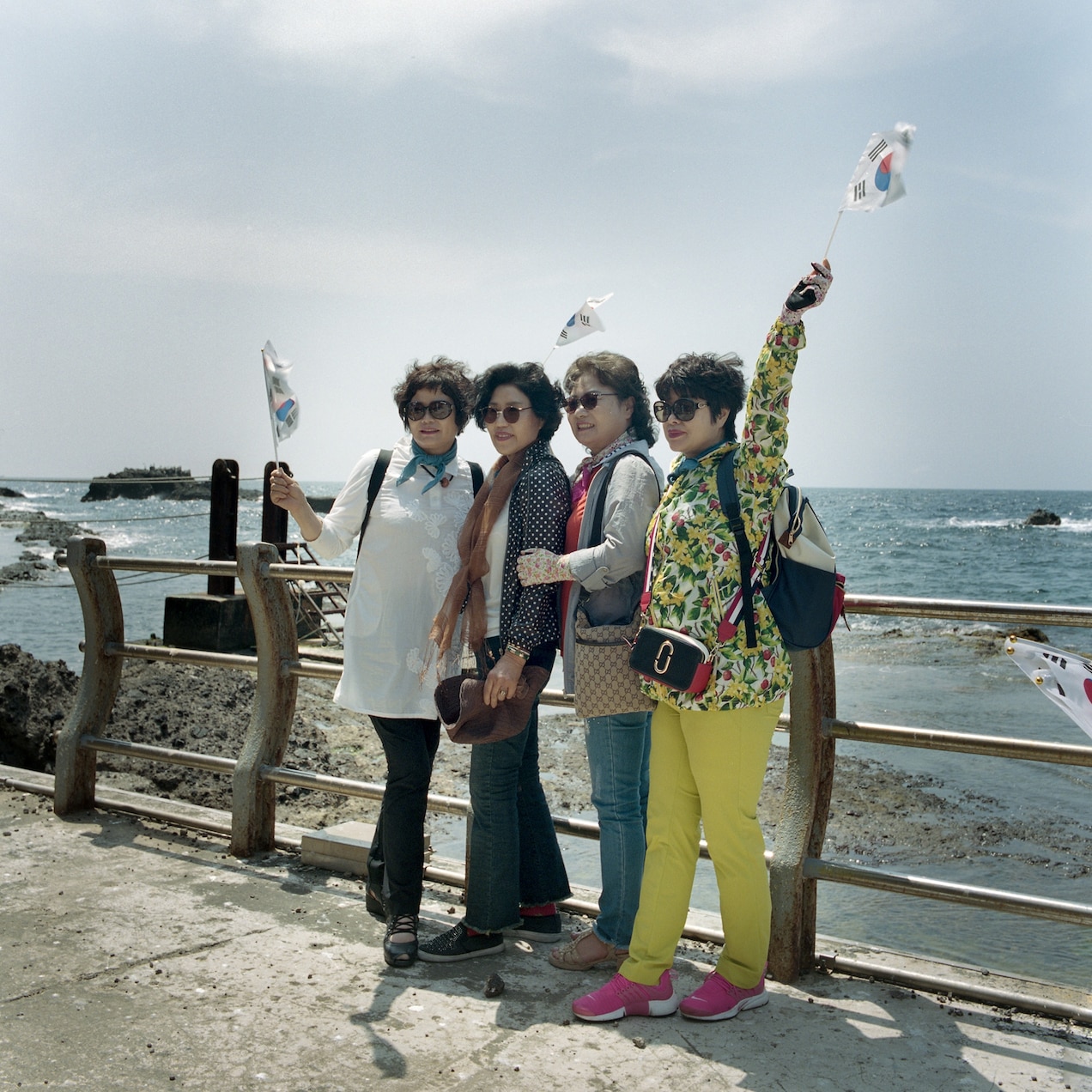 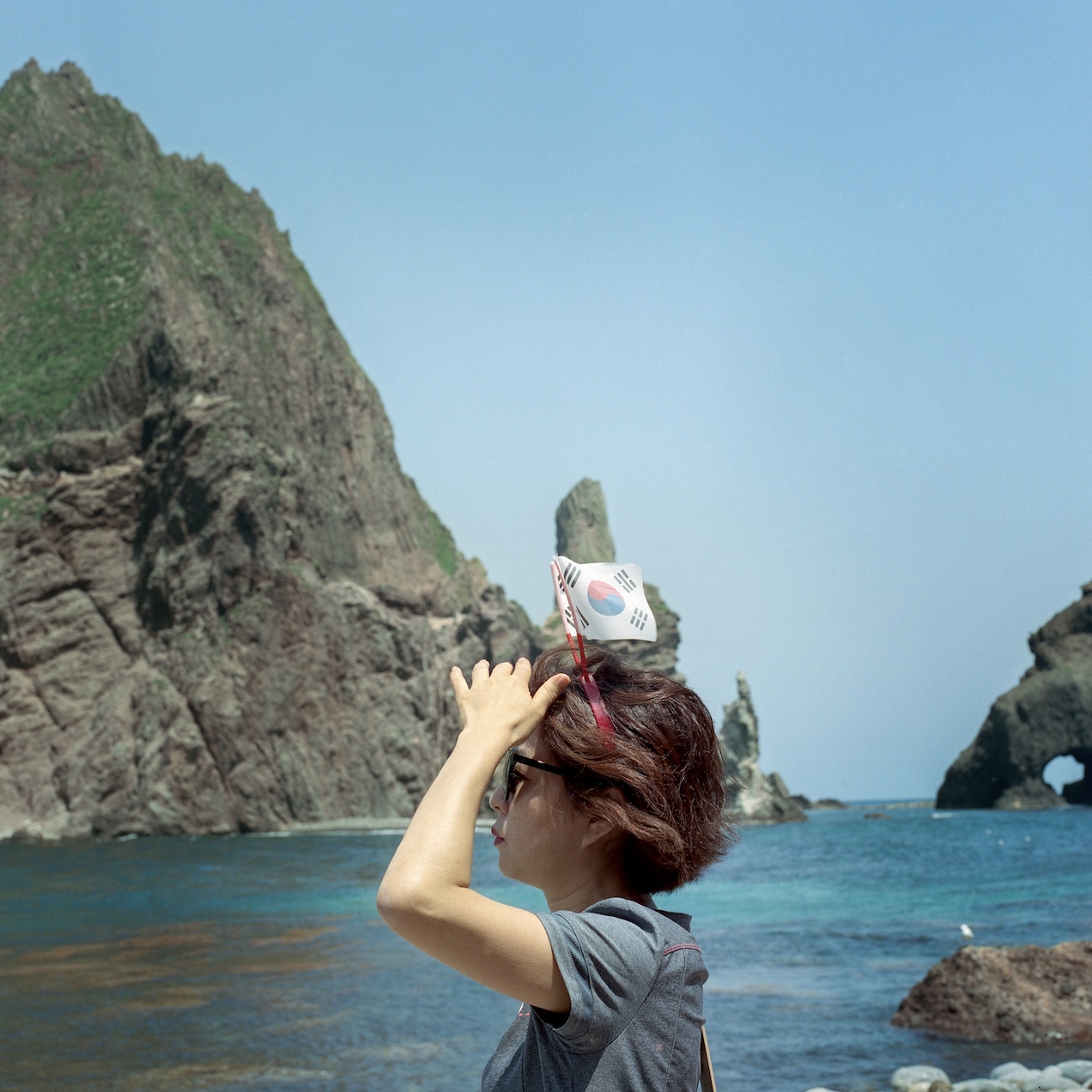 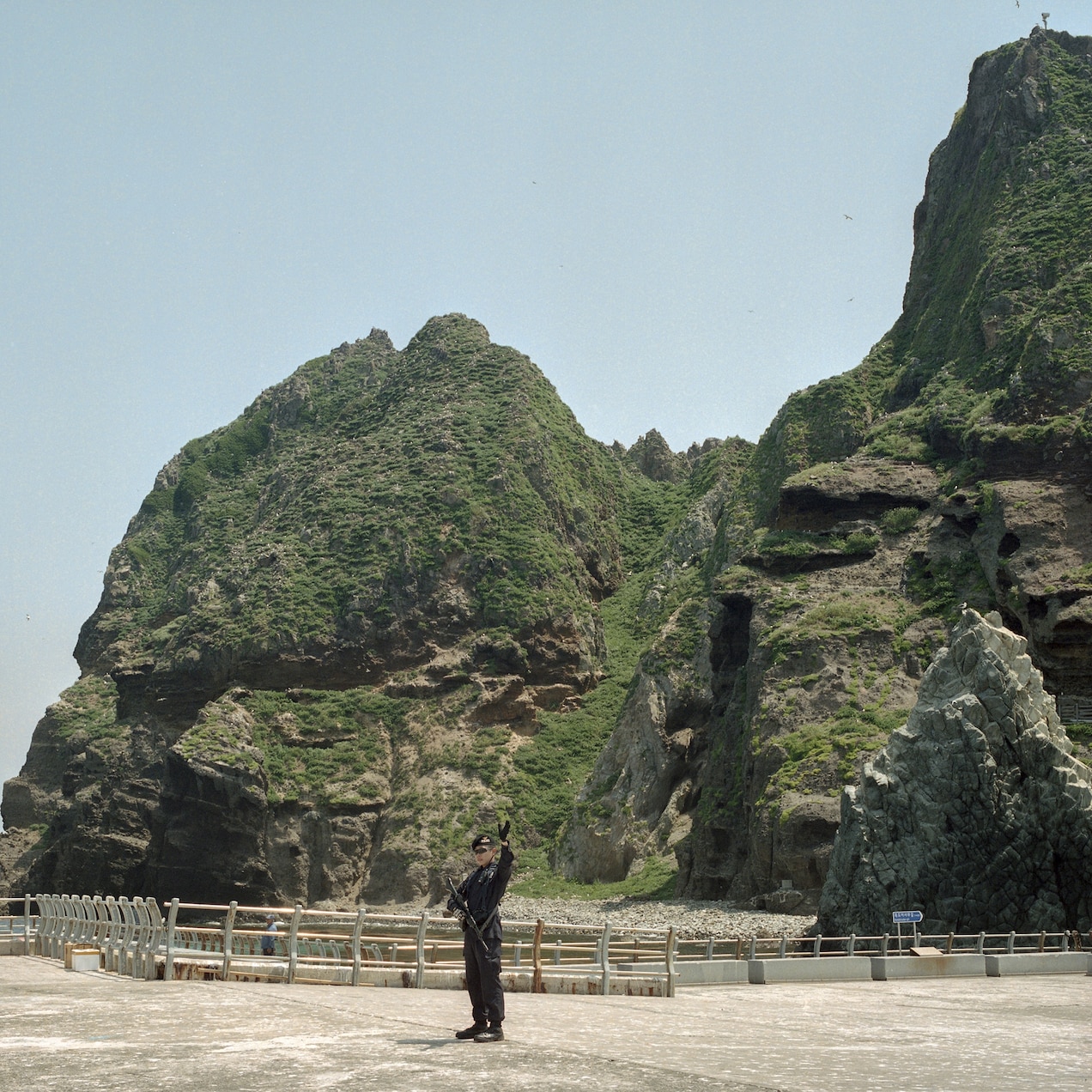 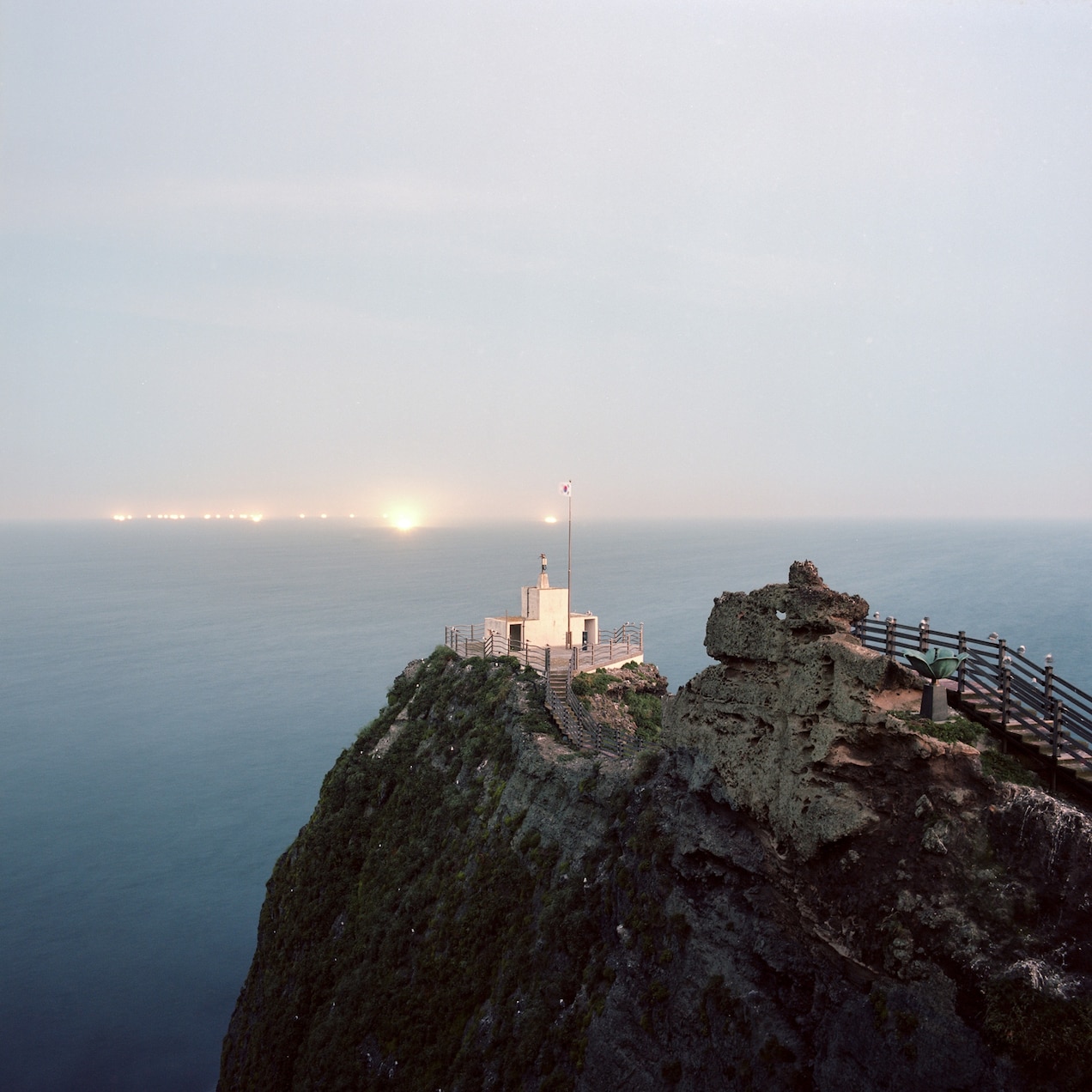 The Dokdo Islands are the center of a diplomatic dispute between South Korea and Japan that goes back more than 300 years./Photograph by Tim Franco

“[Koreans] are very protective of their culture and their race—they want to protect whatever they have,” French photographer Tim Franco, who travelled to the islands this summer, tells National Geographic. “Dokdo is a good example of that. This is one thing that they kept back from World War II and it’s very important to them to keep it.” And while Japan also claims to have sovereignty over the rocks, which they call Takeshima (meaning “Bamboo Island”), it is only Koreans who make the pilgrimage, says Franco. [See inside North Korea’s retro soviet planes.]

A performer rehearses before a ceremony remembering the 1948 bombing of the Dokdo rocks.
Photograph by Tim Franco

Due to erratic sea weather, the rocks can only be visited during the summer months. Weather permitting, tourists can explore the island for an allotted 30 minutes, although the only part open to the public is a small man-made jetty on the east island. “As a Korean, we always wanted to come here once in our lives,” one tourist told Franco. “It means a lot that we finally made it.” Another Korean visitor said they made the journey not only for political reasons but because they “see hope here.”

For Koreans, feelings of hope are also intermingled with deep rooted hostility towards the Japanese neighbors who once occupied their country and who still claim the islets as theirs. Takeshima is “indisputably an inherent part of the territory of Japan, in light of historical facts and based on international law” says the Japanese Ministry of Foreign Affairs website. It adds that the Republic of Korea has been occupying Takeshima with “no basis in international law,” and that it will continue to seek the settlement “in a calm and peaceful manner”.

The dispute is well-worn. According to South Korea, Dokdo was recognized by Japan as Korean territory in 1696 following an altercation between Japanese and Korean fishermen. But, in 1905, despite allegedly being under formal jurisdiction of Korea’s Uldo county, the islands were annexed by Japan ahead of its occupation of the peninsula, which lasted for 35 years up until 1945. According to Korea, the islands were “rightly” restored to them at the end of World War II. Japan disagrees.

Today, Dokdo propaganda permeates the Korean mainland. “Every time you arrive in South Korea and take the train from the airport to the town, there are videos talking about the Dokdo saying they are the most beautiful islands in the country and that South Korea rightfully owns them,” says Franco. According to The Economist, at a dinner during one of this year’s summits between South Korean president Moon Jae-in and North Korean leader Kim Jong Un, mango mousse was served with a chocolate map of the peninsula flourished with a Dokdo-shaped dot. While the squid and shrimp fished in Dokdo waters are said to be the tastiest in all of Korea. [Read how Korea’s heavily armed border is packed with tourists.]

And on Dokdo itself, Korea continues to stake its claim. On the west island, lives Kim Sung-do, a 79-year-old fisherman who joined his now-deceased fishing partner who moved there in 1965 as the first official resident. Now, Sung-do rarely fishes and is likely to return to the mainland soon to join his sick wife, who now lives there full time. “I think now he’s used more as a propaganda tool,” says Franco. “Every time the tourists come, he’s there on the east island welcoming them. With him gone, South Korea might lose the argument of having a permanent resident on the rocks.”

The senior inspector looks at the sea from the highest point of the east island. He is in the middle of his 50-day rotation.
A tourist catches his breath before boarding a boat to leave Dokdo rocks./ Photograph by Tim Franco
On the east island is a Korean military base, where an army chief and 39 young recruits live on rotation. Two years of military service is mandatory in Korea and some choose to do theirs on Dokdo. “It’s easy or hard depending on how you look at it. There’s not much they need to do but there’s not much to do,” says Franco. In the summer, two times a day, the young recruits put their uniform on and go down to welcome the tourists. The rest of the day they only do two things: exercise and play playstation, says Franco.

The bizarreness of tiny island life comes to a crescendo once a year with an annual commemorative parade. On June 8, to remember the Korean fishermen who were killed during a U.S bombing exercise on Dokdo in 1948, statesmen and family members gather in solemn celebration. “It was very ceremonial but very much a PR event,” says Franco, who was there for the 70th anniversary. “The family members were crying even though they had of course never met their ancestors. My fixer, Kathy Yun, saw a journalist asking them to cry one more time for the camera, it was pretty intense.”

The deep scars that continue to disfigure East Asian relations are alive in these jagged cliffs and dark waters. But the Liancourt Rocks—the least combative name for the islets, so-called because a French whaling ship almost ran aground there in 1849—are just one of many islands that are being fought over by Japan, Korea, and China. “They are the three most powerful countries in Asia and there is still a lot of hate and bad sentiment from past history that has not been digested,” says Franco. It is rare, however, that such islands are open to the public. For a fee and two long boat rides, curious explorers can see for themselves what inspires patriots yet divides nations.