How migrants are being used as weapons

The pandemic has crushed the global tourism industry, with thousands of flights cancelled and millions of holidays postponed – but in one part of the world not normally considered a travel hotspot, there has been a surprising surge in visitor numbers.

Belarus, led by Europe’s last dictator and which has become a pariah state with one of its Olympic athletes fleeing to Poland fearing her life was in danger, is experiencing a sudden boom in foreign tourists.

But these are not typical holidaymakers. Their appearance is part of a deeply cynical and alarming policy by Belarus’s strongman leader Alexander Lukashenko to ‘weaponise’ migrants by inviting them from the Middle East and Africa to his country as a stopping-off point before going on to other European countries.

The aim is to punish neighbouring Lithuania for supporting opponents of the Belarus regime and the EU for imposing sanctions over its treatment of dissenters.

In recent weeks, Iraqi Airways has quadrupled the number of weekly flights to the Belarusian capital Minsk from Baghdad and is adding direct flights from three more Iraqi cities. 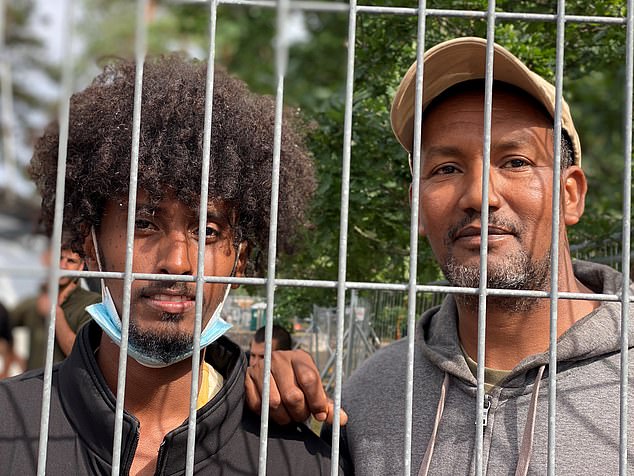 There has been a similar rush of travellers from conflict-torn African nations such as the Democratic Republic of Congo, Cameroon and Nigeria, who are being welcomed in Belarus after travelling via Turkey.

Typical is Sajjad al-Awadi, an affable 25-year-old computer programmer from Najaf in Iraq. Like many of his fellow travellers, he told me he had no intention of staying in Belarus.

He took a taxi to near the border with Lithuania then walked through fields and forests to start a new life in Europe.

He said: ‘We heard on social media about a new way into Europe. I just want a safe life. My family had been threatened so had to leave their home.’

Sajjad is just one of thousands of migrants being used as pawns in this international power game which has opened a new back door into Europe for migration.

This is the latest outrage by Lukashenko, a ruthless despot whose refusal to give up his 27-year rule despite losing a presidential election last year has seen chaos in his country and sent him into the sinister embrace of Russian president Vladimir Putin.

Lukashenko – the former boss of a Soviet collective farm – responded to huge nationwide protests with mass arrests and systematic brutality meted out by his gangs of paramilitary goons and KGB thugs.

I saw five protests during ten days in the country last September – and spoke to people left broken by torture. I heard of crammed cells, cruel beatings, protesters dragged through broken glass, women stripped naked and threatened with rape.

Three months ago, the Belarusian president sent a fighter jet to force down a Ryanair plane flying from Greece to the Lithuanian capital of Vilnius so he could kidnap a prominent dissident and his girlfriend.

As well as Olympic sprinter Krystina Timanovskaya fleeing for refuge in Poland last week, the head of an activist group helping people escape Belarus was found hanged near his home in the Ukrainian capital Kiev. Police are investigating if he was killed, with his death made to appear a suicide after the athlete’s husband fled into the country.

European governments believe Putin’s hand lies behind Belarus’s drive to fuel migration with his constant desire to stoke divisions in the West.

Belarus, led by Europe’s last dictator and which has become a pariah state with one of its Olympic athletes fleeing to Poland fearing her life was in danger, is experiencing a sudden boom in foreign tourists

‘We believe these actions are being co-ordinated with Russia,’ said one diplomatic source in Vilnius. ‘We have no firm evidence, but this all serves Putin’s purposes.’

The impact of what Lithuania’s leaders call ‘a hybrid attack’ on their country is having widespread repercussions. This small Baltic nation of fewer than three million people normally sees about 70 asylum-seekers a year cross its loosely guarded 423-mile border with Belarus.

But 77 arrived in May alone, followed by another 473 in June and almost 3,000 in July. Word spread quickly: The gates to Europe had been flung open.

The trips were assisted in Iraq by Belarus travel firms promoting package ‘holidays’ for just £500, including flights, hotels and Covid tests. This is about ten times cheaper than the dangerous journey with people-traffickers across the Mediterranean.

There have also been unconfirmed claims that Belarus border guards are telling people where to cross the border and to turn off mobile phones to evade detection. Videos on social media taken inside Lithuania prove some migrants are successful.

‘There are clear signs this is a deliberate policy,’ said Marius Janukonis, director of communications for Lithuania’s foreign office.

He said this was crude retaliation against the EU for imposing sanctions – but aimed at Lithuania for supporting Belarusian dissidents, including Svetlana Tikhanovskaya, the rightful winner of the presidential election, who visited Boris Johnson in London last week.

As Janukonis admitted, a surge in mass migration poses challenges to his nation and is clearly intended to stoke tensions in a society with little experience of the Arab and African folk suddenly flowing over its borders.

I spoke to some through the wire fencing of a holding centre that has been hastily built in a forest. It already houses about 800 people in a former army camp surrounded by pine trees and fields of white-flowering buckwheat.

One Iraqi showed me a long gunshot scar on his arm to explain why he had left his homeland.

Two Cameroonians described with sadness their flight from conflict that had driven them so far from their families.

None wanted to stay in Lithuania. ‘It’s a poor country and they don’t want us,’ said one young Iraqi.

‘I’ve always loved England,’ said one man with a smile when I asked people where they wished to go. Most, though, want to settle in Germany.

The lure of this new route was explained by a group of East Africans who paid people-smugglers $3,500 (£2,500) to be driven to Minsk, then crossed ten days later into Lithuania.

‘We got a taxi to about 40km from the border,’ said Alexander Habte, 24, an Eritrean who was studying mechanical engineering in Moscow. ‘It was easy to cross through the forest, but it took three days with no food or water. We were scared at night.’

His family fled Eritrea’s despotic regime into Sudan, where he said they found life difficult as Christians in a Muslim nation. He then travelled to Russia, where his claim for asylum was rejected and where he says he felt he was not accepted due to his skin colour. Like so many others, he is now a foot soldier in an explosive European struggle.

‘It is bad what Belarus is doing because they are putting lives in danger,’ he said. ‘But we have reached our destination – Europe.’

Their arrival is already sparking tensions. Two weeks ago, police used tear gas to break up protests by Lithuanians in the nearby village of Rudninkai trying to block access to build this site. Anti-camp signs have been placed on the road.

‘I feel sympathy for these refugees but we do not know what kind of people they are,’ said one local woman, picking cherries from a tree in her front garden. ‘We are afraid something might happen.’

Another said they felt less safe. ‘Muslims are Muslims,’ she said. ‘When you watch the news on television, you see these acts of terrorism, with bombs here and there.’

Police also used tear gas last Monday after protests erupted in the camp over the conditions amid heavy rainfall.

‘We said we were peaceful but they gave us 20 minutes to back down, then they attacked us,’ said Tamar al-Said, from Babylon in Iraq. ‘We are being treated like animals.’

In the Lithuanian border town of Dieveniskes, plans to set up another refugee centre in a former school dormitory were cancelled after banners were put up saying ‘Stop Migrants’ and ‘We care about our security’.

Eskedar Tilahun, a Lithuanian entrepreneur born in Ethiopia, went to plead with the protesters to stay calm.

‘We must not panic and create hate in our society,’ she told me. ‘The problem is Lukashenko and companies flying in people to cross our border.’

Tilahun, 36, a mother-of-three, fears the crisis will be exploited by the far-Right. ‘We must protect our borders but we must also be humane and solve the problems, not turn on our government – or we serve the goal of Lukashenko,’ she said.

The idea of weaponising migration against Western democracies has been used previously by dictatorships in Cuba and Libya.

But there is cruel irony in this crisis confronting Lithuania as it has long seen high numbers of its own citizens leaving for work in countries such as Britain.

It has also taken an admirably strong stand in support of human rights in Russia and China.

The EU has accused Belarus of ‘an act of aggression’ towards the Baltic state, sending officials and financial assistance to help handle the surge in migrants.

Lithuania has been so unprepared that, two weeks ago, it had to appeal abroad for supplies of razor wire, after all its reserves of fencing had been used up to construct less than three miles of cordon.

The government wants to build a barrier along the entire border.

When I visited one part, there were just posts painted in national colours to denote the frontier, divided by a small river – although guards appeared soon after I started taking photographs.

As part of the country’s tough response to the arrivals, the government has warned that ‘virtually no one’ will be granted asylum because they are party to what it calls ‘a cunning crime’. It has received 1,697 formal applications and already rejected 246.

Meanwhile, Lithuania and European Union leaders have put pressure on Iraq to stem the number of flights, which led to claims that Iraqi Airways flights to Belarus will be suspended for ten days.

In a further sign of ratcheting tensions, however, the Lithuanian government has started pushing back migrants trying to cross the border. It repelled 180, mostly Iraqi, on one day alone last week.

Belarus retaliated by ordering its own security forces to stop them from returning.

President Lukashenko declared: ‘Not a single person should set foot on the territory of Belarus from the adjacent side.’

His officials also claim that some migrants have sustained serious injuries in Lithuania, such as dog bites, and that one Iraqi died from his injuries.

But Lithuanian sources dismissed this to me as ‘fake news’.

They also said they were ‘very worried’ about Russia – which not only bankrolls Lukashenko but has sent advisers to help him crush the pro-democracy movement – holding joint military exercises later this month with Belarus.

‘Belarus’s dictatorship has gone from imprisoning its own citizens to trafficking others,’ said Conservative MP Tom Tugendhat, chairman of the Commons foreign affairs committee. ‘This is a form of piracy in keeping with what it did by bringing down a civilian aircraft.