Built by Ethiopia, the massive Dam project is fueling tensions with Sudan and Egypt. The second filling, set to take place next month, risks making the area even more explosive.

KHARTOUM — A sandstorm throws a thick red fog on Khartoum, making the Sudanese capital look like something out of a Martian chronicle by Ray Bradbury. Locals are used to these terrible haboubs, as they’re called, tempests that can stop planes and paralyze traffic for hours. Still, Mariam feels like there are more of them now than there used to be.

The energetic 30-year-old runs a “guest house” in the al-Emtidad district. It’s not the most popular part of the city, but not the most neglected either. The streets perpendicular to the main asphalt axis are only stony tracks, and mixed in with the small, newish buildings are coffee shops with plastic stools.

In his kitchen, Mariam opens the tap. A trickle of brown water escapes. “Every time the desert sends us its anger, we have blackouts, or end up with this disgusting muck,” he says. “I’m going to have to have water bottles delivered once again to the residents. It costs us a fortune.”

After a reform of the exchange rate system, regulated now by the Central Bank to put an end to the black market, prices have soared, complicating matters even more for a country whose economy was bled dry by Omar El Bashir’s three-decade-long dictatorship (he was finally overthrown in April 2019) and the sanctions that came with it.

There are now queues in front of gas stations and bakeries as people struggle to meet their basic needs: bread, fuel and water, in sufficient quantities. It’s the latter that is most lacking in Sudan. Last month, according to the Khartoum State Water Corporation, the parapublic distribution company, the capital’s daily deficit amounted to nearly 900,000 cubic meters.

In landlocked regions of the country, deficiencies are recurrent — even in the south, which enjoys a humid climate. That’s because precipitation is not very exploitable, due to its variability. The Nile remains the main water resource for a population of nearly 43 millions, more than 5 million of which live in the greater Khartoum area alone.

It comes as little surprise, therefore, that the Sudanese are concerned when they hear the country’s foreign affairs minister talk about the next filling up of the Great Renaissance Dam (GERD) reservoir, scheduled for July, as a “national security issue.”

The dam, built by Ethiopia 45 kilometers south of the border and due to be completed next year, has fueled bitter diplomatic confrontations since construction began in 2011. The tensions come from unsettled historical disputes and recent geopolitical shifts, and from the enormous significance that Nile waters represent for people in all 10 of the countries involved: Democratic Republic of Congo, Burundi, Rwanda, Kenya, Uganda, South Sudan, and especially Ethiopia, Sudan and Egypt.

Cairo was the first to sound off on what will be the largest hydroelectric dam in Africa, with a basin of 74 billion cubic meters (2.5 times the storage volume of the Aswan High Dam, in Egypt) ad generating capacity of 6,000 megawatts that will allow Ethiopia to double its current electricity production. 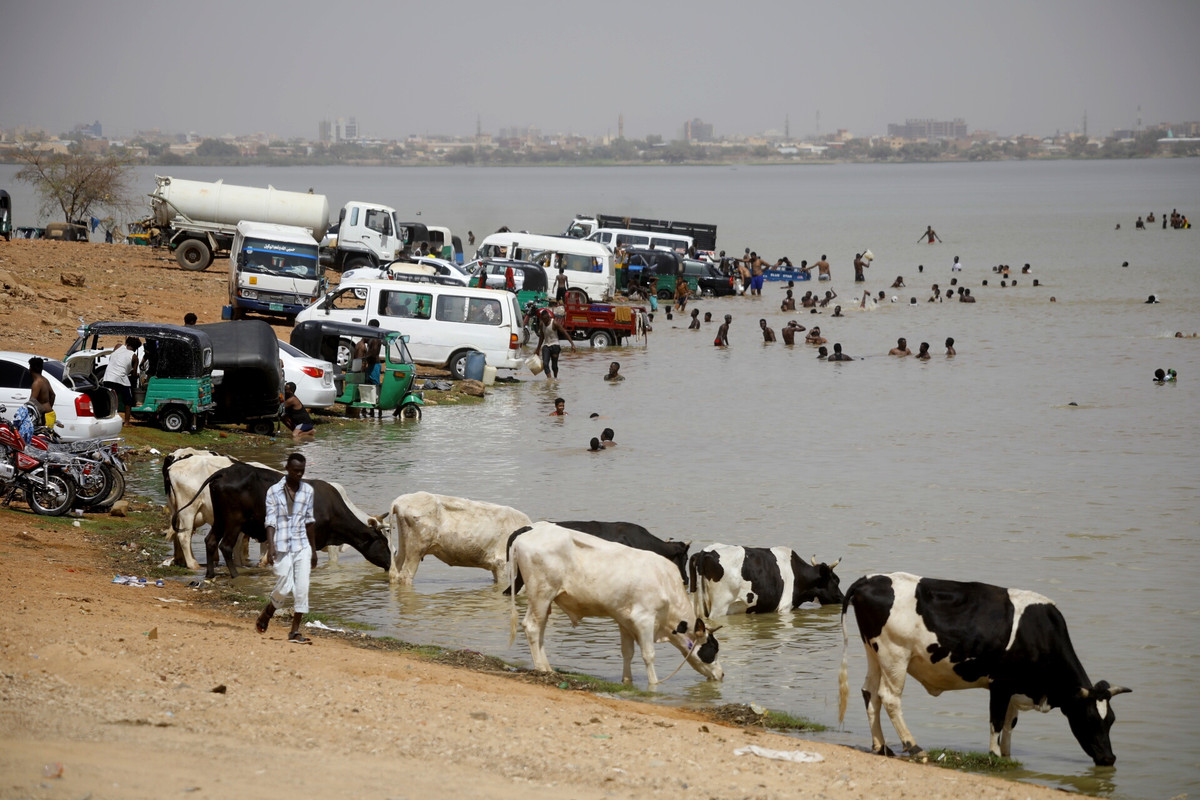 Sudanese cool themselves off in the Nile amid high temperature and electricity power cuts in Khartoum in April 2021 — Photo: Mohamed Khidir/Xinhua /ZUMA

Egypt, with a population of roughly 100 millions, gets a staggering 97% of its water from the Nile, and says it fears a decrease in flow and a loss of sediment necessary for soil fertilization. More specifically, it predicts a drop in annual water consumption from 570 cubic meters per person to 500 cubic meters (one of the lowest rates in the world).

But Bernard Tardieu, an engineer and chairman of the energy and climate change commission of the Academy of Technologies in Paris, says Egypt’s concerns are misplaced. “A dam doesn’t siphon water off. It collects it, and the only real loss is precisely at the reservoir, through evaporation,” he says. “For the Great Renaissance, the evaporation rate will be around 3.6%, much less than that of the Aswan Dam.”

Tardieu says that the real technical issue is the speed at which the reservoir is filled. The electrical power of the turbines depends not only on the flow of water, but also on the height of fall between the level of the lake and that of the river, downstream. To operate at full capacity, the water level will need to be raised even higher than it is after the reservoir’s first filling up, last summer, and that could, in fact, affect the flow received by Sudan and Egypt, the dam expert explains.

Ethiopian Electric Power, the public company behind the project, originally presented a three-year schedule for filling up the reservoir but has since agreed to a five- to seven-year plan, to mitigate the impact on Sudan and Egypt. But either way, Cairo continues to oppose the mega project.

Khartoum too, which was initially open to the Great Renaissance, is now siding with Egypt in what one French diplomat calls “a marriage of convenience” formed over a “trompe-l’oeil crisis — it’s all primarily political and symbolic.

A senior Sudanese official acknowledges that the dam would benefit his county by making flooding less likely during the rainy season and providing more water during dry spells. The problem, rather, is that Ethiopia ignored Sudanese warnings by launching a war in camera in Tigray last November. As a result, the mood between the two countries is no longer for cooperation.

“Despite our reluctance, we agreed to [Ethiopian Prime Minister] Abiy Ahmed’s request to close our borders to Tiger militias to prevent them from using our territory as a rear base, and to open them instead only to refugees,” the diplomat goes on to say.

A few months later, Abiy Ahmed — a Nobel Prize winner transformed into a war chief — even went so far as to revive a border conflict that had been frozen for 25 years by proclaiming that the El-Fashaga Triangle is Ethiopian. In response, Sudanese troops moved to end the de facto Ethiopian occupation of an area of farmland that until recently, Khartoum had been willing to let Amhara farmers use.

All of this raises new questions about the terms of a project that was also supposed to provide Sudan with a new source of electricity. An advisor with the U.S. government, which has just decided on sanctions against Ethiopia, understands Khartoum’s concerns. “This prime minister,” he says, in reference to Abiy Ahmed, “is unpredictable and makes worrying decisions.”

And yet, the project itself — one that looks to electrify a country of 120 million inhabitants, where 70% of the population is still dependent on wood for cooking — is legitimate. How long will Ethiopia be able to hold in its modernization ambitions, by isolating itself, and thwarting its allies of yesterday?