The genesis of the Assam-Mizoram border dispute

Assam-Mizoram border dispute: The violence spotlights the long-standing inter-state boundary issues in the Northeast, particularly between Assam and the states that were carved out of it. 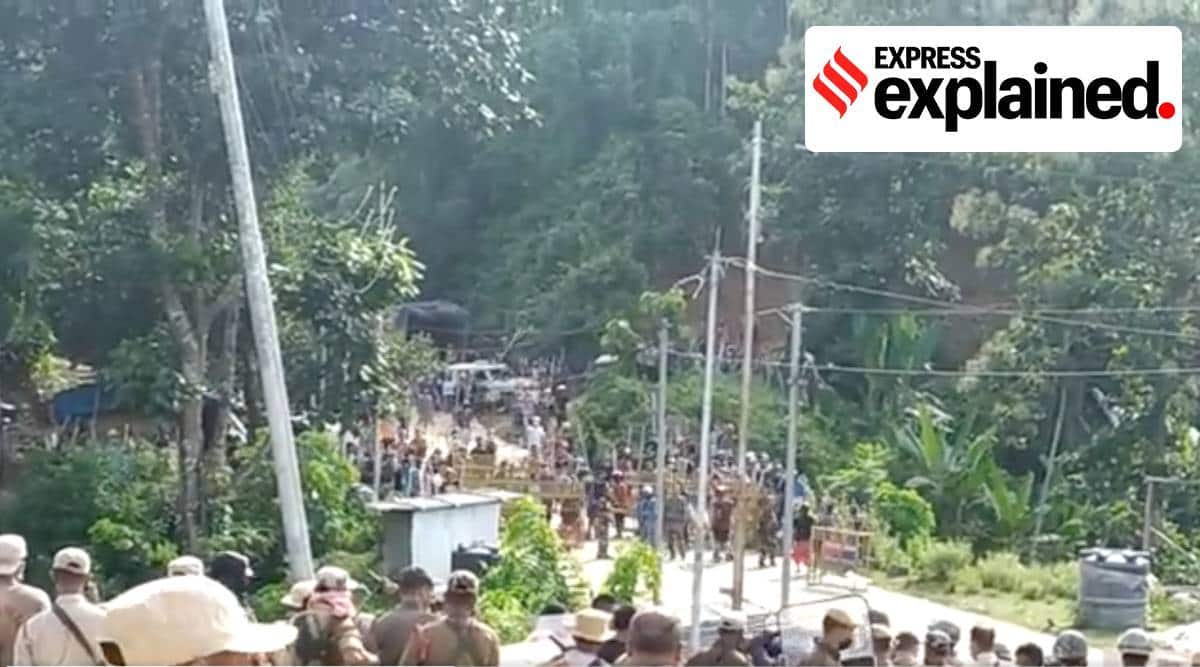 At least five Assam Police personnel were killed after the old boundary dispute between Assam and Mizoram exploded in violent clashes at a contested border point on Monday.

In October last year, residents of Assam and Mizoram had clashed twice in the space of a week over territory, in which at least eight people were injured and a few huts and small shops were torched.

The violence spotlights the long-standing inter-state boundary issues in the Northeast, particularly between Assam and the states that were carved out of it.

What happened in October 2020?

Residents of Lailapur village in Assam’s Cachar district clashed with residents of localities near Vairengte in Mizoram’s Kolasib district. Days before this clash, on October 9, similar violence had taken place on the border of Karimganj (Assam) and Mamit (Mizoram) districts.

On October 9, a farm hut and a betel nut plantation belonging to two Mizoram residents were set on fire.

In the second incident in Cachar, some people from Lailapur had pelted Mizoram police personnel and Mizoram residents with stones. “In turn, Mizoram residents mobilised and went after them,” Kolasib Deputy Commissioner H Lalthangliana had said.

What led to the violence and clashes?

Lalthangliana said: “According to an agreement between governments of Assam and Mizoram some years ago, status quo should be maintained in no man’s land in the border area. However, people from Lailapur broke the status quo and allegedly constructed some temporary huts. People from Mizoram side went and set fire on them.”

On the other hand, Keerthi Jalli, then Deputy Commissioner of Cachar, had told The Indian Express that the contested land belongs to Assam as per the state’s records.

In the October 9 incident, according to Mizoram officials, the land claimed by Assam has been cultivated for a long time by residents of Mizoram.

The Karimganj DC, Anbamuthan MP, however, said that although the contested land was historically cultivated by Mizoram residents, on paper it fell within the Singla Forest Reserve that is under Karimganj’s jurisdiction. Anbamuthan had told The Indian Express that the issue was being resolved.
Mizoram borders Assam’s Barak Valley; both border Bangladesh.

Mizoram’s civil society groups blame “illegal Bangladeshis” (alleged migrants from Bangladesh) on the Assam side. “Illegal Bangladeshis are creating all this trouble. They come and destroy our huts, cut our plants and this time pelted stones on our policemen,” said B Vanlaltana, president of the students’ union MZP (Mizo Zirlai Pawl).

What is the genesis of the boundary dispute?

In the Northeast’s complex boundary equations, showdowns between Assam and Mizoram residents are less frequent than they are between, say, Assam and Nagaland residents.

Nevertheless, the boundary between present-day Assam and Mizoram, 165 km long today, dates back to the colonial era, when Mizoram was known as Lushai Hills, a district of Assam.

The dispute stems from a notification of 1875 that differentiated the Lushai Hills from the plains of Cachar, and another of 1933, that demarcates a boundary between the Lushai Hills and Manipur.

A Mizoram Minister had told The Indian Express last year that Mizoram believes the boundary should be demarcated on the basis of the 1875 notification, which is derived from the Bengal Eastern Frontier Regulation (BEFR) Act, 1873.

Mizo leaders have argued in the past against the demarcation notified in 1933 because Mizo society was not consulted. MZP’s Vanlaltana said the Assam government follows the 1933 demarcation, and that was the point of conflict.

Before the incidents of Monday (July 26) and last October, the last time the boundary saw violence was in February 2018.

On that occasion, the MZP had built a wooden rest house in a forest, ostensibly for use by farmers. The Assam Police and forest department officials had demolished it, saying this was in Assam territory. MZP members had then clashed with Assam personnel, who also thrashed a group of Mizoram journalists who had gone to cover the incident.