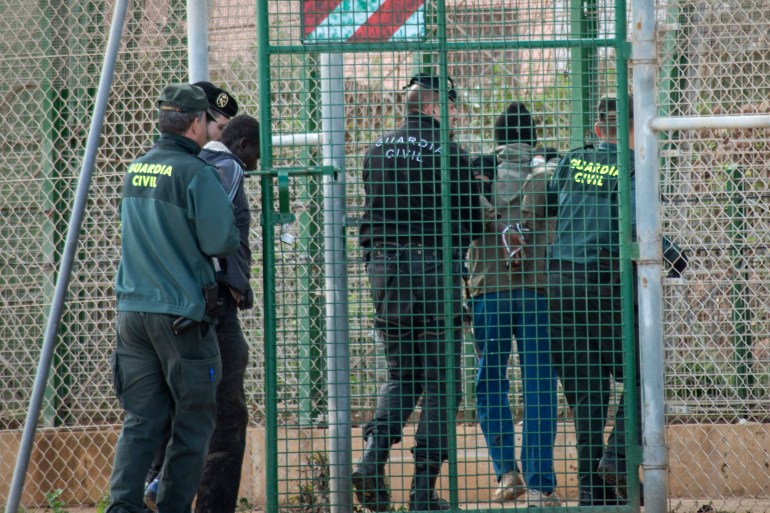 More than 200 migrants and refugees have crossed into Spain’s North African enclave of Melilla after climbing the high fence that separates it from Morocco, according to local authorities.In total, more than 300 migrants attempted to scale the six-metre (20 foot) barrier early on Thursday morning, the authorities said in a statement.

The 238 who made it into the territory were all men.Three police officers were slightly injured when they tried to stop them from making the crossing, the statement added.

Those who entered Melilla were later taken to a processing centre where they will be required to self-isolate in a bid to prevent the possible spread of COVID-19. Migrants and refugees are typically held at such facilities until authorities can figure out if they can be returned to their countries or qualify for staying in Spain.

Melilla and Ceuta – a second Spanish enclave also on Africa’s Mediterranean coast – are popular crossing points for migrants and refugees seeking a better life in Europe. The territories have the European Union’s only land borders with Africa.Both are protected by fences fortified with barbed wire, video cameras and watchtowers.

Since mid-May, more than 500 migrants and refugees have surmounted the Moroccan border fence to make it into Melilla. Meanwhile, more than 8,000 people swam into Ceuta or clambered over the border fence in May after Moroccan authorities appeared to loosen controls for a couple of days, prompting Spain to deploy troops and extra police.

The crisis came amid a major diplomatic dispute between Spain and Morocco over Madrid’s decision to give medical assistance to a rebel leader from Western Sahara, a disputed territory annexed by Rabat in the 1970s. Although Polisario Front leader Brahim Ghali left Spain on June 2, diplomatic relations have remained tense.

Official data on migratory flows to Ceuta and Melilla were still being updated after the surge in crossings in May, while overall numbers intercepted crossing into Spain rose 57.5 percent to 13,483 people as of the end of June.