By Pradip Phanjoubam
In order to understand the clash between Assam and Mizoram place, we have to go back to the British colonial government’s outlook to frontier management 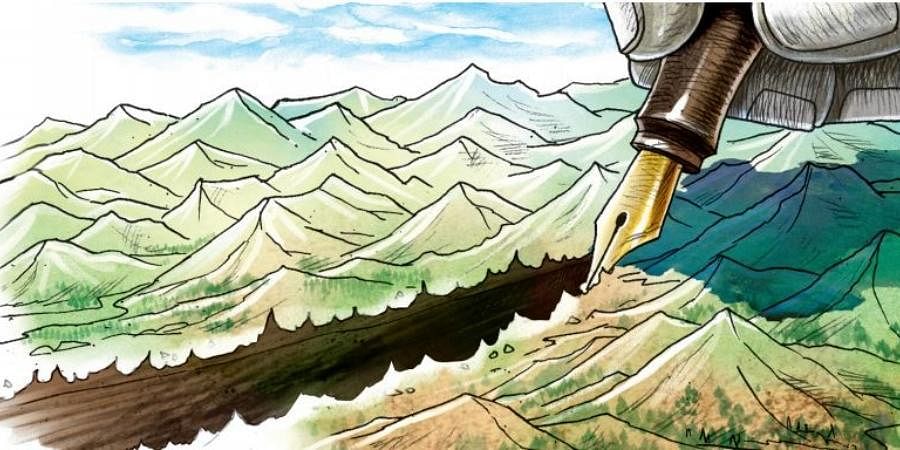 Much has already been said about the atrocious clash between Assam and Mizoram police on July 26 that left six policemen and a civilian dead on the Assam side besides several scores more injured. The sequence of events that led to the deadly confrontation is by now familiar and it will serve no purpose joining the allegations and counter-allegations on who started the fight or whose action amounted to a provocation warranting deadly retaliations. The only thing certain is that though both sides used firearms freely in the unthinkable clash, fatal casualties as well as most injuries were on the Assam side, indicating either greater intent for damage or else better aims of those pulling the triggers from the Mizoram side.

The dispute has a history, specific as well as general. Of the specifics, graphic accounts are already available. Hence a look at the general may be more meaningful in putting this clash in perspective, as well as similar frictions Assam has with all other hill states of the Northeast except Tripura and Manipur. This is so as all these states other than the last two were part of the British province of Assam with its capital in Shillong (now capital of Meghalaya) and this arrangement continued after Independence till 1972.

But even while they remained districts of the British Assam province, the aloofness of the eastern Himalayan mountainous massif, which later became Mizoram, Nagaland, Arunachal Pradesh and Meghalaya states, was administratively acknowledged and separated from Assam’s revenue plains by what came to be known as the Inner Line, promulgated by the Bengal Eastern Frontier Regulation of 1873. The territory beyond this line was claimed but only loosely administered under the broad gaze of the Governor and not made part of the regular provincial administration. A ‘regulation’, as colonial author Edward A Gait explains in his book A History of Assam, is a law made by an executive decision alone, bypassing the more elaborate legislative process, and is generally meant for frontier administration. These are more amenable to changes and indeed, the extent of the Inner Line was changed a number of times simply on the strength of official gazette notifications. Assamese academic Bodhisattva Kar has more details on these changes in his essay When Was the Postcolonial? (in Beyond Counterinsurgency).

These changes became more frequent with the growth of the tea industry in Assam making planters always hungry to claim more plantation spaces in the foothills, but this tendency for an upwards push was prevalent even before the Inner Line came into existence. This was one of the reasons for the devastating raid by Lushai tribesmen (now Mizo) at the Alexandrapur tea garden, leaving its owner Winchester dead and his six-year-old daughter Mary Winchester abducted, prompting the British to launch the punitive ‘Lushai Expedition’ towards the end of 1871. What was witnessed on July 26 on the Assam-Mizoram border was indeed reminiscent of the Alexandrapur carnage.

It would also be relevant to note here that British Assam’s territories beyond the Inner Line were originally termed as Backward Tract and largely unadministered, but reforms introduced by The Government of India Act, 1935, redesignated them into ‘Excluded Areas’ and ‘Partially Excluded Areas’. Hence, Khasi, Jaintia and Garo Hills (now Meghalaya) and Mikir Hills (which has remained in Assam) were then deemed more familiarised with the British system and brought under the ‘Partially Excluded’ category. They were to have representatives in the provincial Assembly, but by nomination of the Governor and not by popular mandate. The ‘Excluded Areas’ remained as before without any representative in the provincial legislature but under the charge of the Governor. After Independence, these territories beyond the Inner Line remained districts of Assam, but under special autonomy provisions provided by the 6th Schedule of the Constitution, except for the Naga Hills district (now Nagaland), where an insurgency had broken out and its leaders were not ready to accept anything less than sovereignty. Short of sovereignty, in 1963, the Naga Hills were amalgamated with Tuensang and Mon region of NEFA (Arunachal Pradesh) to become the first to be bifurcated from Assam as the full-fledged state of Nagaland. A decade later, from 1972 and in the years that followed, after bitter friction in the 1960s over the issue of making Assamese the medium of education, Mizoram, Meghalaya and Arunachal Pradesh too became separate states.

This British colonial government’s outlook to frontier management is very well spelt out in Lord Curzon’s Romanes Lecture titled Frontiers in 1907, two years after his retirement as Viceroy of India. In this lecture, India’s eastern frontiers figure prominently. One of the many interesting things that he said is that the idea of a demarcated, delineated border was unknown outside of Europe before Europeans took it to the colonies. Jurist A G Noorani in his characteristic style provides an example of this beautifully in his book India-China Boundary Problem 1846-1947. When Kashmir came to be in their possession without a fight after their victory in the First Sikh War in 1846, the British had a boundary problem—this precisely was that there was no boundary. As Europeans, the British were so used to the understanding of the modern state as a container, which Peter J Taylor in his essay The State as Container: Territoriality in the Modern World-System popularised, and therefore were uneasy to imagine territory without the confines of hard, well-guarded boundaries; thus began the hunt for a boundary for Kashmir. In the eastern frontier, this very much was also the problem. Hence came the Inner Line, Excluded and Partially Included areas, etc. Curzon even says that the idea of ‘protectorate states’, ‘suzerainty’, ‘buffers’, etc., either evolved or were fine-tuned in the process of calibration of British interests in territories, much of which they did not want to directly possess but all the same did not want other European rivals to start showing interest in. Curzon states Tibet as the most sophisticated example of British’s frontier policy, exemplified in the St. Petersburg Convention 1907 with Russia. In the east too, Curzon sketches a picture of how the British were looking to replicate a frontier policy similar to what resulted in the Durand Line in the west, and build a three-layered buffer between themselves and the French in Indochina with several protectorate states, wild tracts such as those within the Inner Line etc., in between.

From this vantage, the interstate boundary problems in the Northeast demonstrate a continued struggle of indigenous communities to come to terms with the need to reconcile the older notional, amorphous and permeable boundaries of homelands they were familiar with and the modern state’s land revenue system with its hard and precise boundaries. The challenge then is to look for a seamless integration of boundaries that once expanded and contracted, reciprocal to the waxing and waning of power and influence of chieftains, and the reality of the state as a container and its land and land ownership paradigm. Appropriate legislations must be thought of to address both concerns.

It is against this backdrop that the recent clash at the Assam-Mizoram border must be understood. In one of the adjustments to the Inner Line in 1875, two years after it came into existence, the current disputed strip of about 500 sq. km of forest land was made part of the Lushai Hills, but revenue collection was left in the hands of the Assam proper administration as it was easier. In 1933, another adjustment left this land outside the Lushai Hills district. All this is understandable as they were happening inside the undivided Assam Province. Now that Mizoram and Assam are two different states, the former wants the 1875 alignment as their boundary and Assam considers the 1933 adjustment as the more legitimate and rational one.