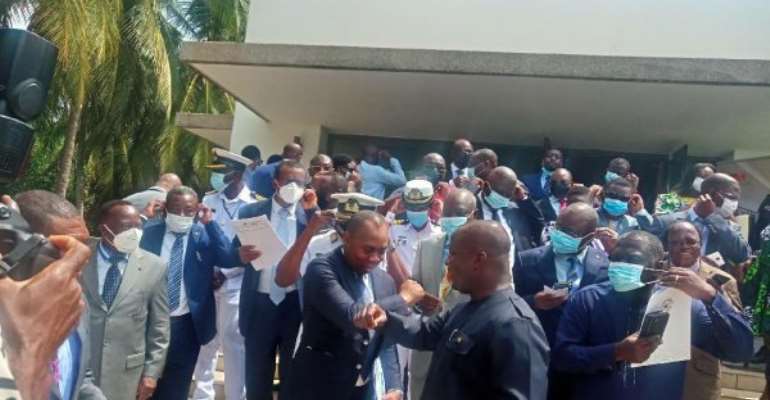 Mr Samuel Abu Jinapor, Minister of Lands and Natural Resources, has opened the Seventh Round of the Joint Ghana-Togo Maritime Boundary Negotiations Meeting in Accra.

The three-day meeting aims at resolving, amicably, the outstanding issues on the delimitation of the maritime boundary between the two neighbouring countries.

Mr Kokou Edem Tengue, the Togolese Minister of Marine Economy, Fisheries and Coastal Protection, is leading his country’s delegation to the Accra Meeting.

Ghana and Togo have been holding negotiations regarding their common maritime boundary since 2018.

To promote peace and good neighbourliness between Ghana and Togo, the Heads of State of the two countries, President Nana Addo Dankwa Akufo-Addo of Ghana and President Faure Gnassingbe of Togo, agreed in 2018 that a peaceful and coordinated joint effort rooted in international law and standards should guide the delimitation of the maritime boundary between Ghana and Togo.

The Joint Technical Committee from Ghana and Togo have been holding bilateral meetings since 2018 to peacefully and consensually delimit the common maritime boundary between Ghana and Togo under international law.

So far, the Ghana-Togo Maritime Technical Committee have agreed on a roadmap for the negotiations on the delimitation of the common maritime boundaries.

Mr Jinapor said in matters of unresolved border issues, direct negotiations, as dictated by Article 33 of the United Nations Charter, had always been the best.

He said even more importantly both countries were enjoined by the United Nations Convention on the Law of the Sea (UNCLOS), which both Ghana and Togo signed on 10th December 1982, to “settle, in a spirit of mutual understanding and cooperation, all issues relating to the law of the sea.”

He said Ghana and Togo had longstanding relations, predating their respective colonial experiences, saying “indeed, most of our people are related by blood, and bonded together by common ancestries and cultural practices.”

“We have peacefully co-existed as neighbours, traded, farmed, fished and married among ourselves. The instant border issue should not and cannot disturb the historic brotherly relations between Ghana and Togo”.

Mr Jinapor said it was also important to mention that both countries were parties to the African Union Convention on Cross-Border Cooperation, which called for peaceful resolution of border disputes and to transform border areas into catalysts for growth and socio-economic and political integration of the entire continent.

He recalled that both countries, together with Benin, Burkina Faso and the Ivory Coast, adopted the Accra Initiative, to prevent violent extremism and spill-over of terrorism from the Sahelian Zone through cooperation, and to address transnational organised crimes.

The Minister said those were matters of great importance, which required that the two countries continued to live together peacefully and resolve all issues between them constructively.

“Undoubtedly, while there remains significant work to be done, the Government of Ghana is pleased with the progress made so far in resolving this issue,” Mr Jinapor stated.

“We are reassured by the renewed commitments, contained in the joint communique issued at the end of the last session held in Lome, to conclude discussions on the provisional arrangements for the temporary management of the Transboundary Area.”

He said the provisional arrangements, when agreed at the session, would be adopted by both countries and shall remain in force whilst negotiations continued in good faith to resolve the substantive issue.

Mr Jinapor, who urged the Seventh Session to adhere to the roadmap adopted at the last session, also expressed the hope that a final agreement would be reached before the end of the year.

“In fidelity to our commitment, in both the UN Charter and the UNCLOS, we are poised to resolve these issues through negotiations and hope that the resolutions adopted at the end of this session, will give us a stronger foundation to mutually resolve this boundary issue,” he said.

“The peoples of our respective countries look up to us to offer bold leadership in ensuring peaceful co-existence.”

On his part, Mr Tengue said because of the goodwill and commitment to frank and sincere negotiations shown by both countries, he remained convinced that they would succeed as soon as possible in definitively resolving the issue of delimitation of maritime borders.

Brigadier General Emmanuel Kotia, the Co-ordinator Ghana Boundary Commission, said the success of the Joint Ghana-Togo Maritime Boundary Negotiations was imperative for the peace, security and economic advancement of the two nations.