Africans do not yearn for Europe 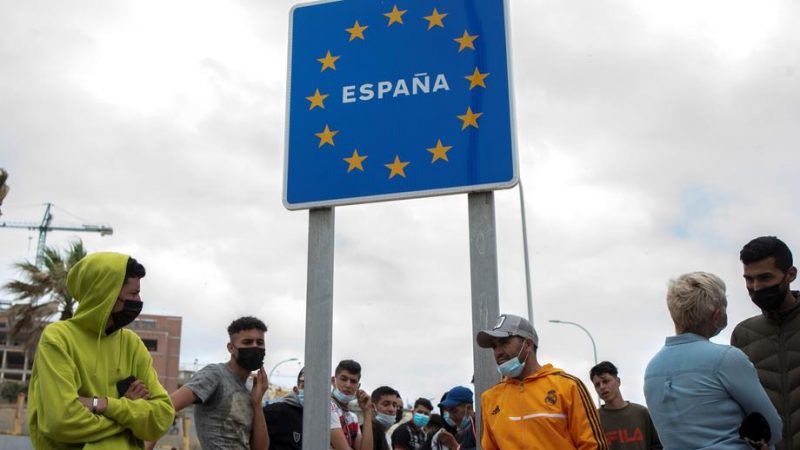 The recent events in the Spanish enclave of Ceuta may have suggested otherwise, but (most of) Africa does not yearn to come to Europe, writes Oriol Puig.

The recent events in the Spanish enclave of Ceuta may have suggested otherwise, but (most of) Africa does not yearn to come to Europe.  Many more people migrate within Africa than seek to reach the EU.

Continually presenting the other side of the wall as a place of hunger, poverty and violence lacks rigour and feeds the narrative of the European El Dorado – a no more accurate image. Morocco, Turkey and Niger are three different sides of Europe’s border externalisation. They merit more attention.

“Avalanches”, “migration pressure”, “waves” of migrants, “aggression at the border” and so on. This hackneyed political and media discourse fuels false notions of invasion and stokes up mistrust and fear.

The macabre game played by Morocco and Spain seems to confirm that opening up borders unfailingly results in the “mass” arrival of migrants, “fleeing war, misery and poverty”.

But looking beyond this skewed, self-serving narrative, is Africa really lurking on the other side of the wall?

Around 75% of African migration movements occur within the continent itself. The remaining 25% go to America, Asia or Europe. When it comes to West Africa, the balance is around 90%/10%.

African movement is thus fundamentally intracontinental and inter- or intraregional.  In fact, 80% of Africans considering emigration have no interest in leaving the continent, according to data from the International Organization for Migration (IOM).

But stage-managed theatrical performances like that in Ceuta and the discourse that surrounds them contribute to spreading the opposite impression.

The entry of thousands of people into the Spanish city over a few days visualised the serious consequences of Europe’s border externalisation policies. On the one hand, it showed migration being used as a geopolitical bargaining chip and the flagrant violation of human rights.

On the other, it enshrined the border as spectacle, where racist and xenophobic posturing and paternalistic aid-based visions confirm the belief that below the northern shore of the Mediterranean is only vulnerability and poverty. Walls, thus, become a focus of attraction, division and concealment.

Fences, “hot returns” and other repressive policies can contain thousands of people for a certain amount of time, but they do not deter. In fact, they often do the opposite. The symbolic power of walls is overlooked: not only do they separate, confront and restrict, they also seduce and captivate.

They draw attention because they conjure a sense of the unknown – whatever merits so much effort (and money) to protect it must be really valuable. Border securitisation contains a lot of this. And so Fortress Europe adds to the idea of a European El Dorado. The imaginaries are complementary, not antithetical.

Enforced obstacles drive up frustration and indignation and do not reduce determination. When a barrier is lifted, a short period of intense movement may result – as in Ceuta – but soon afterwards the flow tends to subside.

Relaxing border controls does not inevitably mean more people moving. In the short term, it allows those who have been blocked to enter and may draw the attention of others who never wanted to leave, but in the medium to long term movement tends to reduce. Being able to cross at any time brings a tranquillity that calms expectations.

On the other hand, as well as limiting the entry of foreigners, barriers also distort the perception inside of what lies outside. For those seeking to jump them, the walls may be high, but for those who build them, they are often impassable.

This leads to the assimilation of discourses that present the outside world as wild, backward, poor and violent. The vision of Africa, for example, is homogeneous, unnuanced, uncomplex – the continent is helpless and vulnerable.

Stereotypes are reproduced and the underlying causes of global and domestic inequalities are ignored. Responsibilities, both historical and present, are thus ignored.

In the case of Ceuta, the army was deployed, language was militarised, colonial tropes were given free rein in the name of national identity and attempts were made to reintroduce containment as the only way out of a crisis that is really diplomatic, rather than migratory.

Talk of Moroccan “blackmail” is not balanced by mentioning the EU’s repeated demands and conditionalities, which have now blown up in its face. Some tear out their hair at this show of “strength” by an authoritarian kingdom that has undoubtedly been given undeserved power.

And meanwhile, in the Sahara desert, the European institutions continue to impose, constrain and aggravate already precarious situations.

In the Sahel, Europe’s obsession with curbing migration hinders traditional mobility and ways of adapting to climate change and violates the free movement protocols of ECOWAS – a kind of West African Schengen area – blocking in thousands of people and contributing to worsening instability in the area.

All of this takes place out of sight of European public (and published) opinion, but it creates an ideal breeding ground to swell the ranks of armed groups.

The criticisms of the EU do not absolve Maghrebi and Sahelian leaders, their acolytes and other beneficiaries of these measures from responsibility. The Maghrebis, who have greater capacity to influence, have given warning of their room for manoeuvre and willingness to use migration as a political weapon.

The Sahelians, aware of their growing geostrategic importance, are seeing their stock rise. In the space of just two months, the EU has been forced to (more or less tacitly) accept two coups d’état in the region, in Chad and Mali, so as not to lose its retaining walls.

Ceding authority to third countries of questionable legitimacy to do its dirty work is a major problem. However, the key question to unravel surrounds the reasons so many see these firewalls as inevitable.

To unpick this, refuting and defusing the hate speech of the far right will not be enough. A full-blown revision is needed of the hegemonic narratives that too often also permeate nominally progressive positions.

The potential difficulties arising from migration should not be minimised, but movement in and of itself should cease to be problematised.

Binary discourses (we/them) should be avoided, rights-based approaches insisted upon, data embraced and the centre repositioned. In other words, we must stop thinking of Europe as the sole champion of history.

All of this requires the media, politicians, civil society and academia to defend verifiable evidence and resist fiery outbursts. Because (most of) Africa does not want to come to Europe. And the blind obstinacy of believing it does risks strengthening the discourses that Europe says it wants to fight.

Oriol Puig is a researcher at the Barcelona Centre for International Affairs. The original version of this article, in Spanish, can be found at CIDOB.

**This article has received funding from the European Union’s Horizon 2020 research and innovation programme under grant agreement No 821010. It reflects the author’s view, the EC and its Agency are not responsible for any use that may be made of the information it contains.